a place of recollection, reflection, and inspiration. 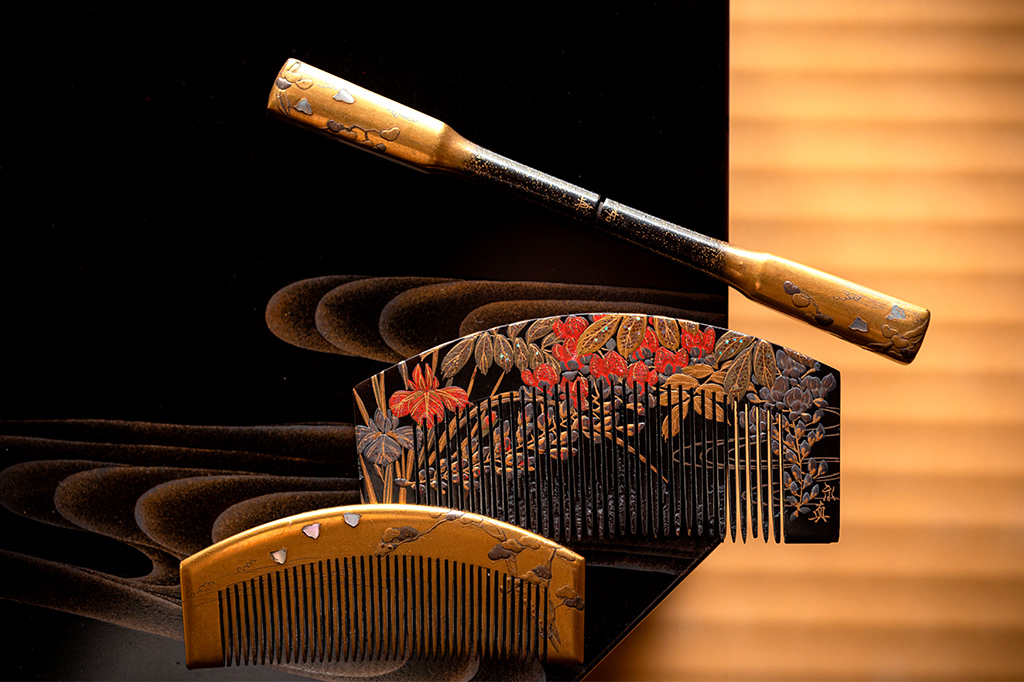 I was born into a family that has operated a salt wholesale in Hyogo Prefecture for more than 400 years. In this family, there were my great-grandmother, grandmother, mother, older sister, and myself - an unbroken lineage of strong, intelligent, and caring women.

My family consisted of mothers, daughters, grandmothers, and granddaughters, and for several years we were a collection of five generations with my great-great-grandmother being with us. In this female lineage multigenerational household, the language, values, and dialects of the Meiji, Taisho, and Showa eras were alive and well. Traditional Japanese culture, seasonal events, customs, meals, and folklore beliefs were at the core of our lives.

As I reflect on my childhood, I now realize what an enormous impact these generational values had on me and feel that the foundation of my personality was nurtured in these traditional cultures and beliefs. I was also positively influenced by religious rituals and practices, such as prayers, spells and dedications, which were not only from Buddhism and Shintoism, but also all the other surrounding deities.

My grandmother was the head of a kindergarten that our family ran. This kindergarten was within our house property and gave me the opportunity to see working women and other female leaders with decision-making authority every day. 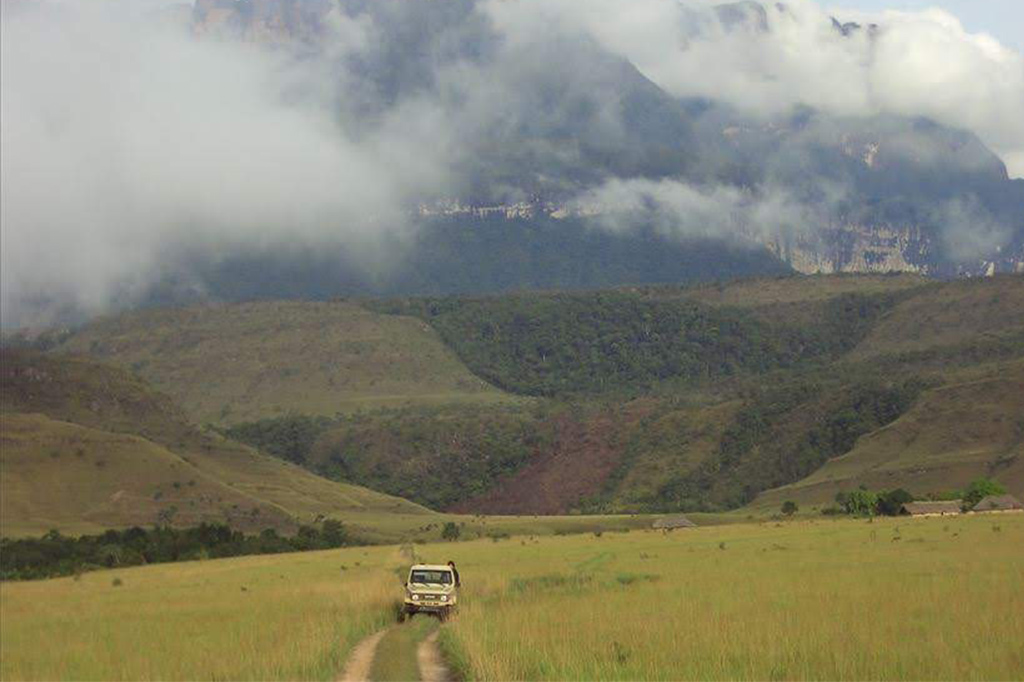 At the time, many Japanese students were studying abroad in Europe, the United States, and Canada but I was filled with a sense of adventure and wanted to create my own unique experience. I wanted to do this experience in Venezuela, a South American country where everything was the complete opposite of Japan.

During my year in Venezuela, I was able to experience the unique and dynamic nature of the country, such as of the Guiana Highlands and the Caribbean Sea. Present here were native culture, the history and culture of colonial times, the bonds and love between people nurtured by Catholic teachings, and a world of Spanish language that I was not yet accustomed to. I was so thrilled to find that my horizons were broadening as I lived with my local family and friends, as well as with other unique and talented international students from around the world.

During this time I came to realize that cross cultural understanding is the richness of life.

AFS (American Field Service): The AFS program is based on the philosophy that "at the age of 16, before they have established their own sense of values, high school students must learn different cultures and languages, exchange opinions, and learn the process of understanding cultures and values different from those they are familiar with in a completely different environment, in order to help bring about world peace. This is a worldwide network of volunteer families and schools who agree with the philosophy that "the process of learning different cultures and languages, exchanging opinions, and understanding cultures and values different from the ones one is used to will lead to world peace.” 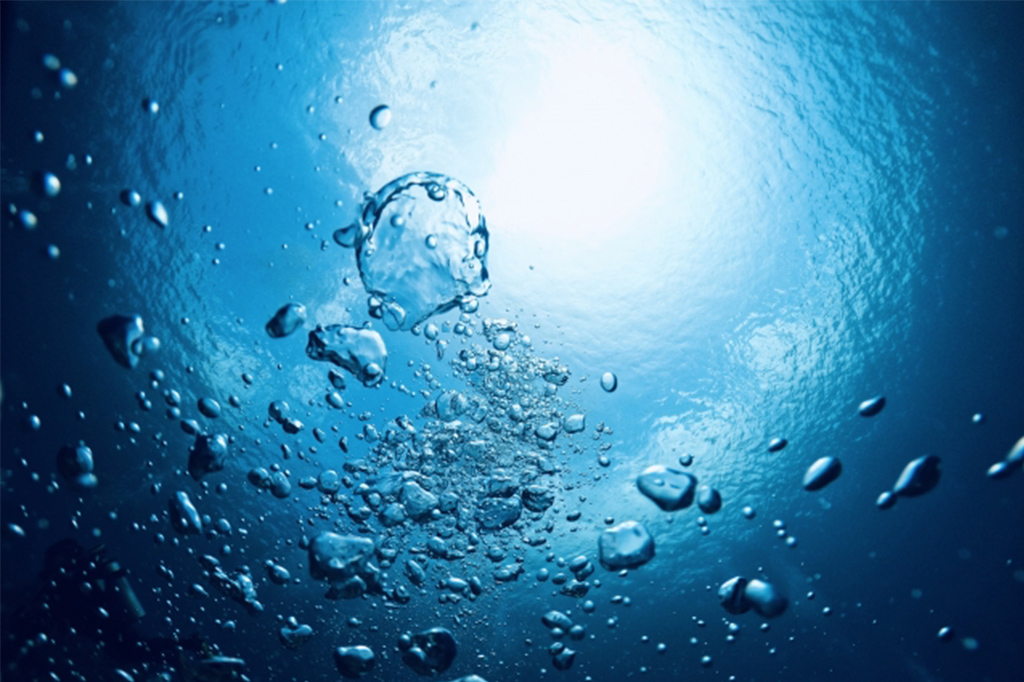 A magical experience at the age of 16

Michiko Zentoh at the age 16.

I was 16 years old and went to an uninhabited island in the Caribbean Sea for a week with fellow exchange students I met in Venezuela.

The island was like a heaven with the amazingly beautiful beaches, ocean breezes, coconut trees and hammocks. One day, I dove into the water - into the caleidoscope of the coral reefs and colorful fish. The scenery was so beautiful that I forgot all the time and continued to swim with only one pair of goggles.

At one point, I held my breath and dove even deeper into the sea, and then, without thinking, I relaxed. No swimming, no thinking, no worries - I just relaxed completely and entirely. The scene that spread out before my eyes was a blue world with no top or bottom. It was the universe itself.

The earth appeared before my eyes, and I was looking right at it. To the universe, I knew I was as small as a grain of sand on the earth and insignificant. However, I felt that I was one with the myriad of life forms on the earth, and at the same time, all of them existed within me.

“What is this?” I wondered in amazement.

When I came out of the sea, the brilliant sun was like the power of light as the deity of the universe; Dainichi Nyorai. It poured down on me like a raging waterfall. In the light, I received the life force itself, and what welled up in my body like magma was a powerful sense of "Something else is allowing me to live" and a deep, uninterrupted feeling of appreciation. Alongside this emotion appeared a deep and intense sense of gratitude that has never ceased since. It was the moment when my sense of values and philosophy were established. 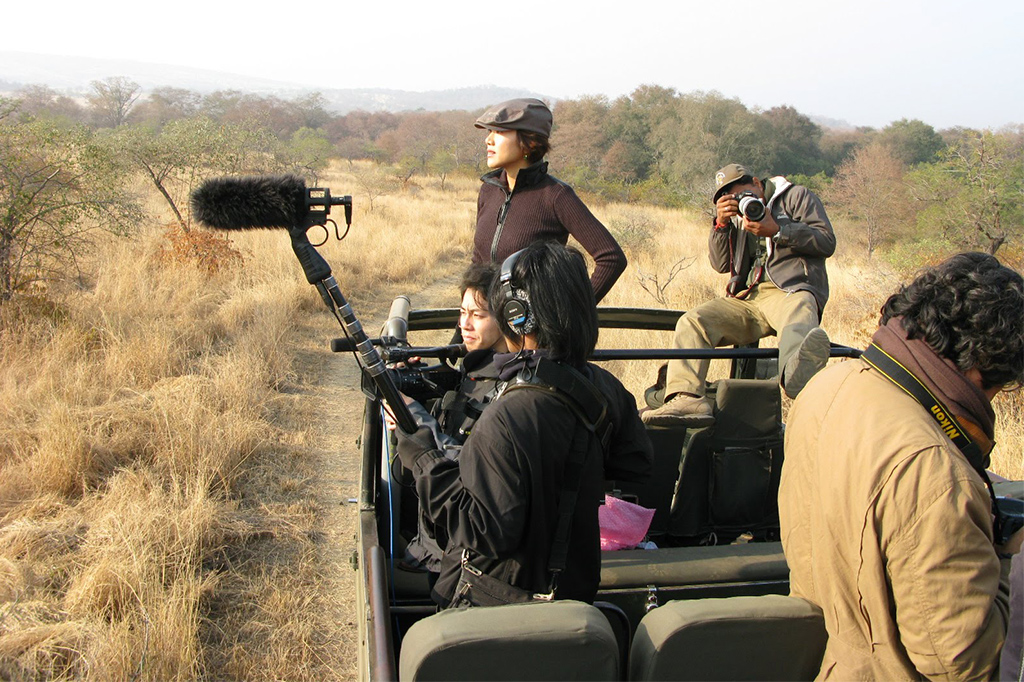 From University to Independence

I love people, art, language, and cultural anthropology. From a young age, I was looking for meaning to my existence in these fields in order to shine and make the people around me happy.

While studying intercultural communication at San Francisco State University, I came across the director Mr. Li Man Wah's film "Color of Fear" and was convinced that videography was a tool to allow people to simulate different cultures as if they were living that experience. I decided to make it my life work.

While still in school, I began an internship at TCI, a local cable TV station, where I learned the ins and outs of video production. Work entailed everything, from miscellaneous work to floor director. I also learned film photography and developing techniques under the supervision of the editor-in-chief of the San Francisco Chronicle. This experience became the cornerstone of my career, and since then I have traveled all over the world, meeting many different lives during these adventures. I have been involved in the production and filming of many programs that unravel different cultures. Overflowing with the joy of seeing new worlds that shake up our existing values, I am continually moved by the richness of the Earth and the people that inhabit it. 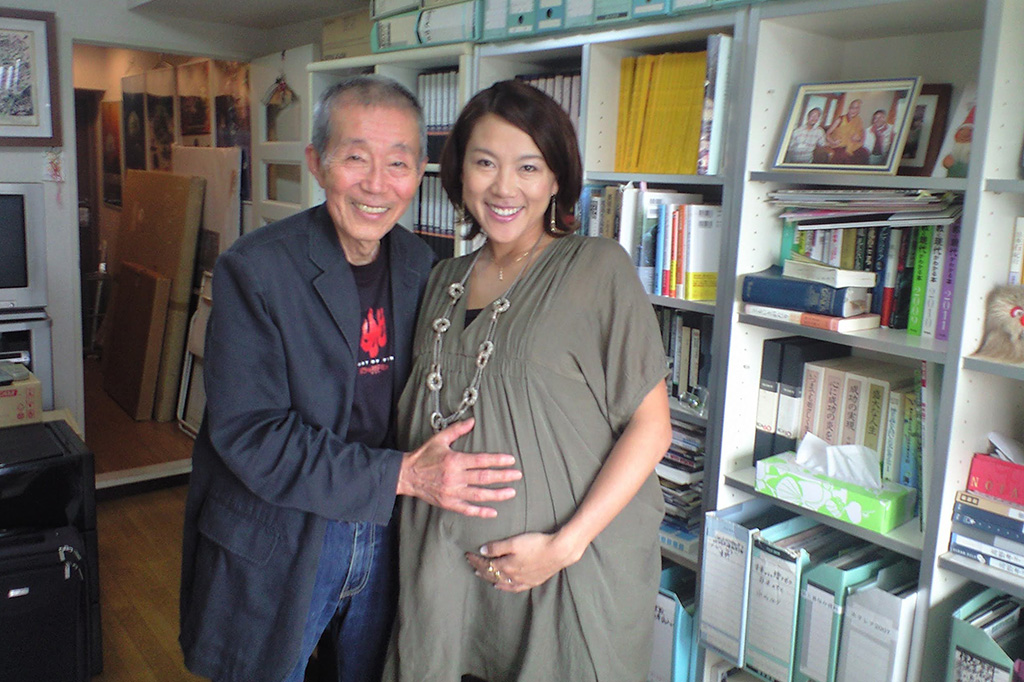 After returning from San Francisco, I was in my last year of university in Japan and I had decided to pursue a career in film.

Although I had already decided to pursue a career in film and television, I was thinking about how to take the first step. Around that time I came across a book by Mr. Jin Tatsumura, "The whisper from Gaia".* As I was debating how to start my own journey, I was shocked by the book.

In the book, he describes many things similar to what I had experienced in the Caribbean Sea through various people, things, and perspectives - I could not put into words what I was feeling at that time. The connection between Mr. Tatsumura’s stories and my own stories resonate powerfully within me.

I sent a letter to the director, enclosing a reply postcard.

To this young stranger, a mere student, who asked to work with him, he replied, "Come to see me first, and build up your experiences and strength until the time is right for you."

With the blessing of Director Tatsumura, I worked tirelessly in 50 countries around the world. After 10 years of learning every possible role in the film industry, I was asked to join the staff of the director's film series "Gaia Symphony", and I participated in the production of the seventh film. Skipping the eighth film while raising two children in Africa, I was again invited to participate in the production and filming of the ninth film, and was blessed to be able to take part in that experience.

The Caribbean sea reminds me that my origin is there, even when I am busy with my everyday life. It reminds me that the root of my philosophies, life experiences, and passion for life are there. Thanks to that experience many years ago as an exchange student, I was able to make a connection with Director Tatsumura.

Mr. Tatsumura's worldview, which has always encouraged and motivated me, is my guideline for living.

Note: Director JinTatsumura's worldview is based on the Gaia Theory of the Earth as a living organism in itself, as espoused by the British biophysicist Dr. James Lovelock.
"Gaia Symphony" official website: https://gaiasymphony.com 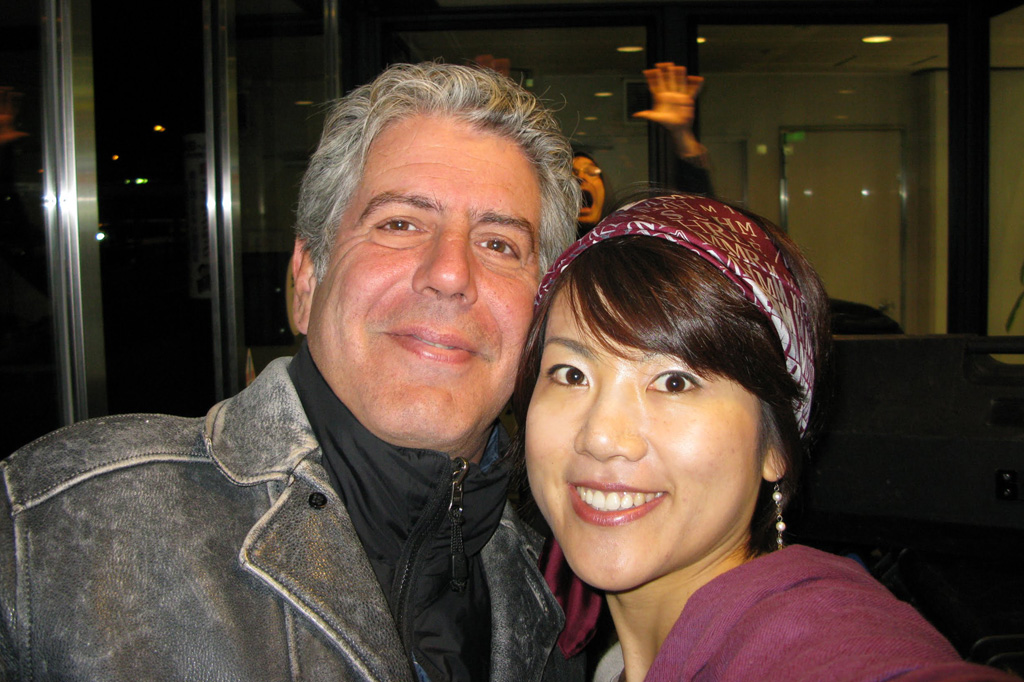 
Today I would like to say once again a big Thank you to Anthony Bourdain, my friend and mentor in many ways on TV productions, the art of storytelling, and life as a whole.

This spring came with my debut as a director of a documentary program. It is a 45- minutes video project on Japanese sweat culture for National Geographic and I just came back from the 10-days intensive shooting around Japan, with the photographer & author of the cult book “Sweat”; Mr. Mikkel Aaland, who appointed me as a director & producer for the Japan episode of the series “Perfect Sweat”. 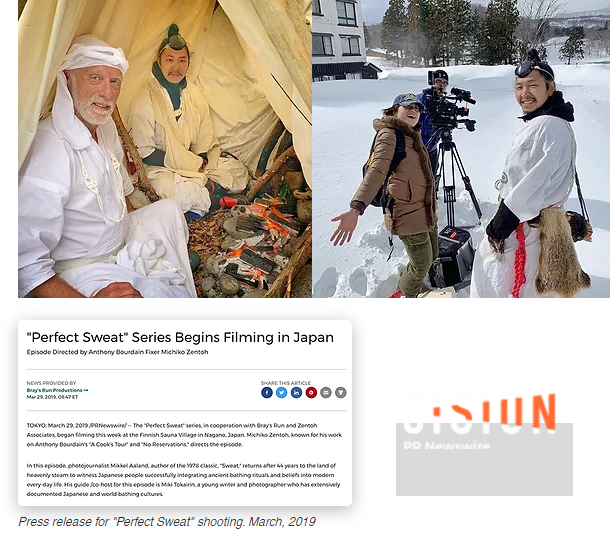 It took 20 years for me since I first worked for Tony, but during the shooting this time,
I deeply realized how much I had learnt from Tony and the production with him. The method and the knowledge I used during the direction of shooting, I realized many came from the work with Tony. Many of my knowledge about the Japanese traditional culture came through the experience with Tony. Even I was a fixer, he and the team involved me to contribute so much in story making and developing production to one goal as one team. I was raised by our work together and now finally. I grew up until able to direct one program and I cannot thank for all the opportunities lead me to here. I feel strongly now, I have so much gift given from him and the team since Cook’s Tour in 2000, and now it is my responsibility to make good use of them fully. 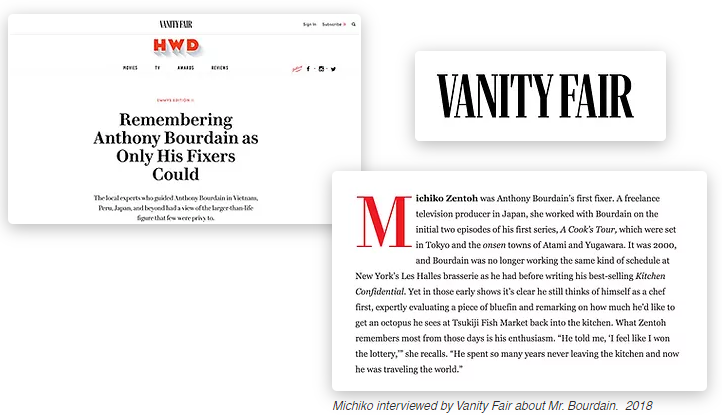 
Lastly, but most importantly, I would like to extend my sincere and special gratitude to Mr. Chris Collins and Ms. Lydia Tenaglia, the producers and founders of Zero Point Zero Productions. All started with the friendship with these two when they came to Japan for the first time for Cook’s Tour shooting for New York Times TV. Only four of us started with the small two cameras, low budget, chasing after Tony as a host day by day creating the scenes and stories. Chris and Lydia literally gave me the opportunities to start working for productions as independent field producer/ fixer, and two gave me insights about the future, they are the ones who recommended me to go to NYU for film school, as well as have referred me to many productions around US when they ask them for contacts of local production in Japan. Without Chris and Lydia, my career did not depart in the way it did, and the two game me faith in planting seeds and realizing the dreams, which was the biggest gift I got in my career. Thank you to Chris, Lydia, Tony, and Zsuzsa & Michelle who first connected me to Chris and Lydia as friends, and everyone involved in the continuous productions and this process of making the world as one lovely neighborhood. Thank you…!

“Remembering Anthony Bourdain as Only His Fixers Could” VANITYFAIR｜
https://www.vanityfair.com/hollywood/2018/08/remembering-anthony-bourdain-as-only-his-fixers-could
page top ▲